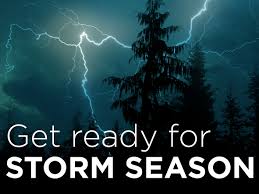 The time in of the year when hurricanes develop in the Atlantic Ocean. Tropical cyclones in the North Atlantic are called hurricanes, tropical storms, or tropical depressions. In addition, there have been several storms over the years that have not been fully tropical and are categorized as subtropical depressions and subtropical storms. Although these are not as strong as tropical cyclones, the damage can still be catastrophic.

Activity hightens in late summer, when the difference between temperatures aloft and sea surface temperatures is the greatest. However, each particular basin has its own seasonal patterns. May generally the least active month, September the most active. The Northern Atlantic Ocean, hurricane season occurs from June to November, heightening from late August through to September.

Tropical storms are named from a predetermined list. About 10 named storms occur each season, with an average of 5 developing into hurricanes and 2 becoming major hurricanes (Category 3 or greater).